What do Aquaman, the Rock, Damien Marley, J.Cole, and Jack Jackson all have in common? ...Their support for Mauna Kea.

Native Hawaiian's have occupied the road to Mauna Kea's summit for the past 17 days in an effort to halt construction on the Thirty Meter Telescope also known as TMT. A project set to begin construction on Sacred Hawaiian land. Looking past the negativity, many celebrities have spoken out in support.

Jason Momoa stepped out at 12:30 to speak about the Telescope Protests at Mauna Kea, Big Island of Hawaii.  “This is at the forefront of my life. I tried to do everthing to spread these moments around the world for everyone that loves our lands to the far off reaches of the world to show what is going on here.  I just want want to say that I’m thankful to the protectors and the stewards of this land, and we are not going anywhere. I am not going anywhere. ” Mamoa said July 31, 2019.
In addition to showing support on social media photos, Momoa asked celebrities and followers to sign and publicize the Stop TMT Construction and Arrests of Mauna Kea Protectors petition at Change.org.

KAPU ALOHA. Finally with my people. So many things to come. We are United We are Mauna Kea Aloha nui j

"When you have humans hurting any where around the world, lets stop, be considerate, let's be empathetic, and let's take care of our people. at the end of that it comes to taking care of the people. "

"Sure so, what's happening in Hawaii right now. There are protestors on the Big Island in Hilo, and there's a mountain Mauna Kea.  And Mauna Kea, some of you may know this is a Sacred place to native Hawaiians. And there is a Telecope to be built there that's 18 stories, eventually it will be the size of a football stadium and the issue that the native Hawaiians have is that it is sacred land. That there is a trust that was breached to build the telescope. and what I wanted to do was get my boots on the ground, and go there personally because I grew up in Hawaii. And I know what it feels like to have that sacred land. It was really a beautiful experience it was so inspiring, because you have men and women and small children (Kapuna) who aren't leaving who are so steadfast and passionate about this land, about the sacredness of this land. And I joked that cheat meals were church. But the truth is this mount is their church. And it would be like building on their church. So I wanted to go get my boots on the ground there and speak with them directly and get a deep dive and form a dialogue with them. and then I realized. This is so much bigger than a telescope being built. It's for humanity theses are human beings who's hearts are hurting. And I think anytime situations like that come up, again this is like a microcosm of the bigger thing around the world, at least how I look at scenarios like this pop up.  When you have humans hurting any where around the world, lets stop, be considerate, let's be empathetic, and let's take care of our people. at the end of that it comes to taking care of the people. " Dwayne "The Rock" Johnson

At the heart of any matter, is where the truth lies. Truth is, these people - our people - are the backbone and spirit of Hawaii and our culture. They are willing to die here to protect this very sacred land we stand on. This is not about stopping the progress of science. I’ll always be an advocate for science advancement, but not at the expense of human beings who are hurting. When we lead with empathy, we make progress thru humanity. I remain optimistic our leaders will do right by the people. Because in the end, that’s really the only thing that matters - people. #MaunaKea

Other notable celebrities speaking out on the cause:

Took my Diva homies up to da Mauna yesterday to help spread more awareness about what’s going on here in Hawaii. Whenever my friends ask me what’s going on up there my first response is if you can you have to come feel what’s going on because it’s almost indescribable Mahalos @cassieemua and @bretmanrock #bretmanpohaku #mua #farmersmarkethawaii #theotherrockcametoday #thepohaku #dwaynejohnson

Rapper J. Cole spotted reppin’ a Mauna Kea sweater at the NBA All Stars Game in Charlotte, NC🙌🏽. Would love to know more about what this sweatshirt really means to him, given that the brand has reposted ‘Protect Mauna Kea’ photos in the past. Either way, he could’ve worn anything but chose this...so it’s beautiful and uplifting to see our Mauna in the spotlight during such a crucial time.

#Regram #RG @ashlukadraws: WE ARE MAUNA KEA. Standing in solidarity with protesters on Mauna Kea, protecting the Sacred ‘āina from scientific imperialism. It breaks my heart to see indigenous people and land continue to be dismissed by the state of Hawaii and its wealthy developers. Words from @kanielaing: “You don’t have to be Hawaiian to understand the dangerous precedent this sets. Mauna Kea impacts all of us. It’s an environmental struggle against wealthy developers who seek free reign. It’s a microcosm of what’s happening across Hawaii and the world: profiteers exploiting fragile places without regard for the future. We’re not concerned about how many passive dollars this will bring our economy. We are concerned about whether we will be able to breathe in 20 years, or be out of fresh water, or have any space left in our sacred places, or if the beaches we grew up in still be there. Some things are more important than a quick buck—like our planet’s and peoples’ survival. That would be $1.3 billion well spent. #maunakea #wearemaunakea #kukiaimauna” To support, visit kahea.org / donate to Hawaii Community Bail Fund (link in highlights) ❤️ ———————- This image was drawn using stills from my friends at @standingabovetheclouds, a beautiful, powerful portrayal of the mothers and sisters at the forefront of the fight to protect sacred land on the Big Island.

I love you Hawaii, and I'm with you. #protectmaunakea

Nathalie Emmanuel, one of Momoa's 'Game of Thrones' co-stars. 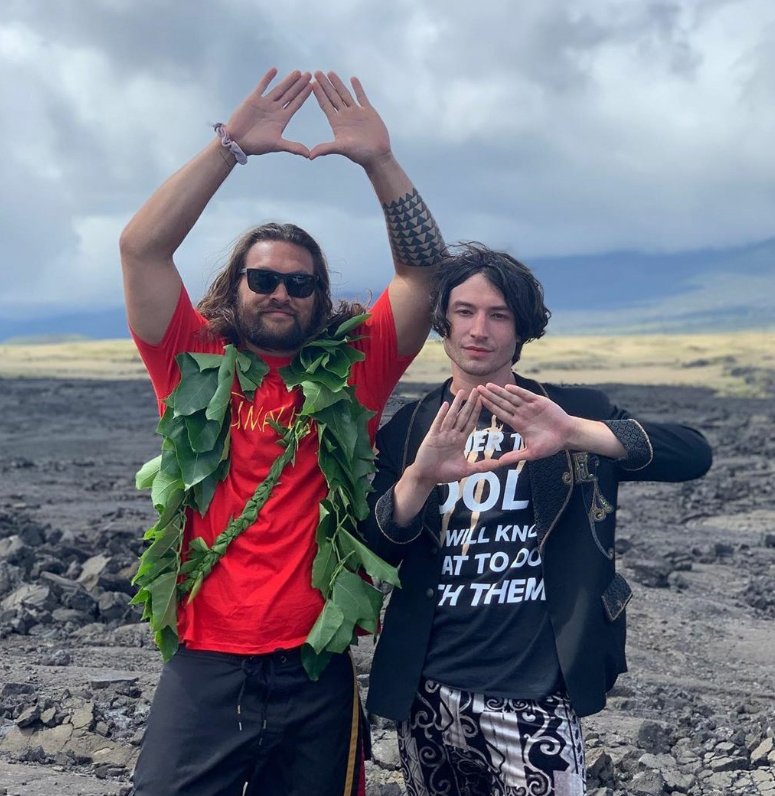 In a move intended to de-escalate a standoff between scientists and native Hawaiians blocking the construction of a massive telescope on a mountaintop they believe to be sacred land, Gov. David Ige on Tuesday night rescinded an emergency proclamation that was issued to help remove demonstrators.  Hawaii Goerner David Ige Extends Thirty Meter Telescope Permit Amid Protests.

Ige made the announcement at a press conference saying there are no immediate plans to move heavy construction equipment onto Mauna Kea, the intended site of the Thirty Meter Telescope, which is expected to be the largest in the world, looking farther back into space and time than any other instrument is capable of doing.

Because #TMT construction is not imminent, I am withdrawing the emergency proclamation effective immediately. I remain committed to moving forward with this project in a peaceful way and will continue efforts to engage the community. https://t.co/5VVcEXMrGC #MaunaKea

As an Artist to me this is everything I could ever hope for in my career because I could lose the money and materialistic things in the blink of an eye and as most of you know that did happen to me before and not only that tomorrow is promised to no one and if it was my time to go I would have no regrets and I find so much comfort in knowing my kids would see constant reminders of their Dad thru my designs and its my hope that it would inspire them to work hard and chase their dreams without making the mistakes I made.

I’m just an artist that creates things I can connect with and that make sense to me. Sometimes it’s political sometimes it’s comical and other times it might be both. This design was born out of necessity because I feel that it has a story a story of appreciation of culture, friendship and our precious resources and it’s not just about a telescope anymore as many other levels of corruption have revealed themselves but it’s about unity and the support from not just Hawaiians to other Hawaiians but support and compassion from everyone all over the world and the commonality of of being part of the same race as equals, The Human race. To learn more about what’s happening please follow someone that is more knowledgeable then me and who can fill you in and update you on protocol and also donations to everyone up on the Mauna.

Vox also published an in-depth article on the topic:

Why Native Hawaiians are fighting to protect Mauna Kea from a telescope written by Vox Media.

Also for those who ask me what my role is up there my answer is simple and honest “I have no role”. I’m just another born and raised local boy from Hawaii that believes the system has been corrupted and broken for a long time now and it needs to come to an end. I’d also like to help protect and preserve what little we do have left. #mahalotheuniverse #compassion #grateful #maunakea #farmersmarkethawaii #brokenhardened

Did we Miss a celebrity in support of the movement? Mention them down in the comments below.  👇

Earn while you shop online

JOIN THE WAITLIST or MISS OUT 👇